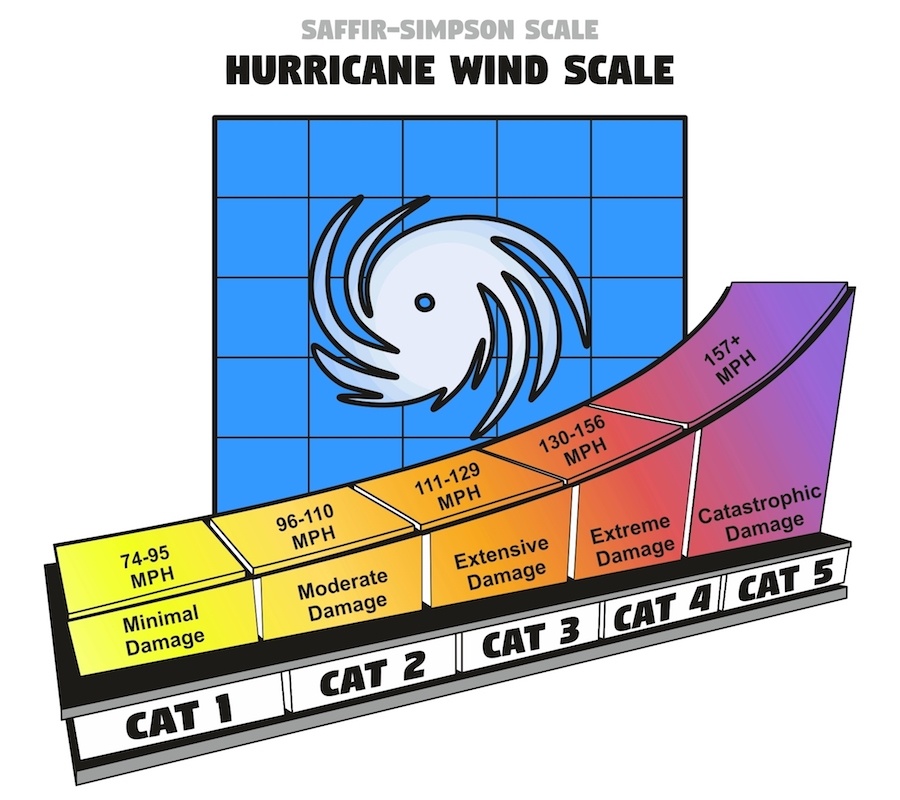 Category X? What Is the Difference Between Hurricane Categories?

Hurricane categories can seem extremely confusing, appear arbitrary, and offer little understanding of what your level of precaution should be to stay safe and protect your property. This confusion is why it's important to be proactive in learning what the differences are and how you should be prepared to protect yourself and your property.

Related Blog: Tips for Tying Your Boat to a Dock

Hurricanes are measured on the Saffir-Simpson Hurricane Wind Scale. The category refers only to the speed of the wind around the eye and not other factors that are also important to those affected, such as the overall speed of the storm, size of the storm, and rainfall amounts. The scale assigns categories from 1 to 5.

Deciding what your evacuation plan should be based on hurricane categories, depends mostly on how much damage the winds at that level can do and the storm surge factors. Category 3 and above are considered "major" hurricanes. Generally, you should start considering executing your evacuation plan for a category 3 or above. The categories are measured in knots, but typically reported in mph so that people can understand the effects better (this resulted in a change in the mph range for category 4 in 2012, although no storms were re-categorized).

Anything that is below category 1 (sustained winds of 74-95 mph) is not a hurricane, although it could eventually strengthen to a category 1. These types of storms are considered tropical storms or tropical depressions.

A category 1 hurricane, with sustained wind speeds of 74-95, is unpleasant and potentially dangerous outside your home. This type of storm will produce some damage, such as shingles being blown off roofs, branches and smaller trees falling, and has the potential of knocking down power lines.

Category 2 storms have wind speeds between 96-110 mph, and can cause major damage to a roof or siding, and has the power to knock over a large amount of trees. At category 1 there is a risk of power outage. Category 2 will almost certainly cause an outage, unless your power lines are buried, which is generally the case only in urban areas.
It's at a category 3 storm that things get really nasty. Category 3 storms have wind speeds of 111-129 mph and can blow off parts of roofs, snap or uproot large trees, and are likely to knock out electricity and water.

Category 4 storms can take the entire roof off of a well built house and leave the area uninhabitable. Category 5 storms, with winds of 157 mph or higher - will destroy houses. So, basically, if it's 3 or above and you are in the direct path, you probably want to get out. Closing storm shutters will only do so much.

Storm category, though, is not the only factor to consider. Storm surge is not always directly related to storm categories and is much harder to predict - surge warnings are issued separately however. Storm surge is connected to wind speed, rainfall amount, and the overall speed of the storm. Storms that linger can also cause other flooding events. As storm surges from major storms can reach higher than that of small homes, take storm surge warnings seriously. Storm size is also an issue - one of the reasons Irma was so bad is because it was a very large storm with a wide path. The larger the storm, the further you should go if you decide to evacuate. Obviously, this should be balanced with other issues - for example if you have livestock.

Understanding what a hurricane category actually means and what it tells you about the storm, is important for anyone who lives in Florida, especially in areas vulnerable to storm surge.

Regardless of the size of the storm, though, always make sure you and your property are prepared for hurricane season and that you have an emergency plan in case you need to evacuate.

What are the Best Materials to Use When Building a Seawall?

When to Replace Or Repair Your Boat Lift